To Honor a Courageous Woman
She was the First of Many Who Came And Stayed! 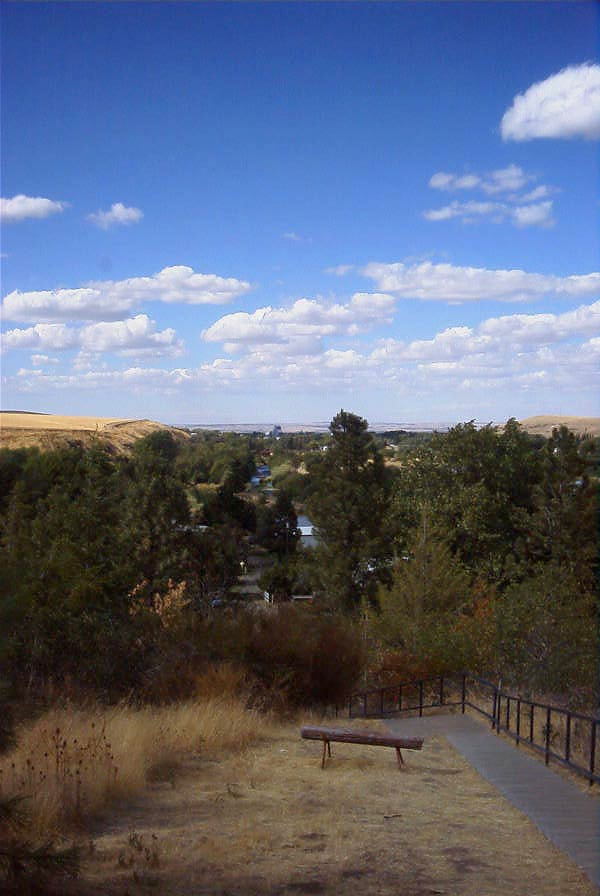 The park is named in memory of Marie Dorion, a courageous Indian woman, whose name is inscribed on the first step.  She served as a guide for the Wilson Price Hunt expedition from Missouri, and found her way to what is now Milton-Freewater in 1813.  She survived, while many in the party starved, were frozen or had been massacred by Indians.
The Iowa Indian woman was the first settler in the Walla Walla Valley.  Fifty-five pioneer families followed her trail at the turn of the 19th century and decided to call the Walla Walla Valley their home.

The trail committee members saw fit to preserve the important influence the settler had on the early history of the area.  The “Trail” started out with 72 steps, each with a name of the trail-blazing family etched upon it, being sponsored by interested individuals and descendants of those historical families. Currently, the steps have 160 names.

The pouring of the steps for the “Trail of the Pioneers” at the Marie Dorion Park on Couse Creek Road was began in September 1969, with the supervision of the Park Committee members, Fred Etling, W.S. Caverhill and Russel Blackler.  Merle Blades did the sandblasting for the historical steps.

The old concrete power plant building was converted into a covered picnic area. The burrs which ground wheat at Miller’s Mill were placed on the grounds which were once planted and tended by Fred Etling with indigenous plants and trees.

We have information on most of the pioneers named on the steps.  If you would like more information please contact us by e-mail at Frazier Farmstead Museum.

The trail consists of over 200 steps, each with the name of an old pioneer family and date sandblasted in concrete.  The steps were sold to defray the cost of construction, to the descendants of the pioneer families.  (Exerpt from Marie Dorion and the Trail of the Pioneers.)

Marie Dorion and the Trail of the Pioneers

Read “Marie Dorion and the Trail of the Pioneers“ Compiled by Harry E. Ringhand  and Published by the VALLEY HERALD, INC. Milton-Freewater, Oregon 1971. Many of the Pioneers listed on the steps are listed in this booklet.  There is an index included with the transcribed booklet.

The steps are in PDF format. They are searchable. Names in boldface signify that there is information on the descendants. Those documents are listed below.  Information is provided courtesy of Frazier Farmstead Museum.