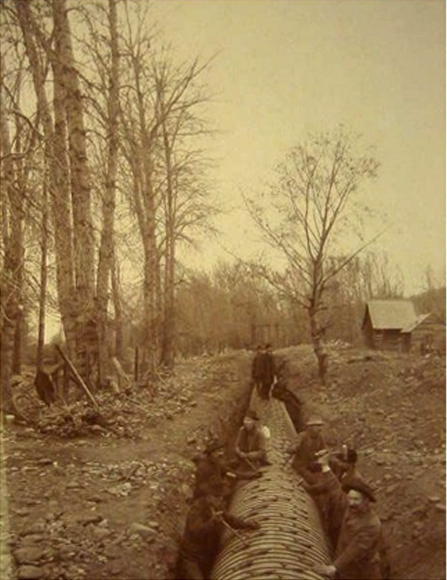 Construction of the wooden flume to bring water into the city’s power house in 1929. It was 48 inches in diameter and 5 miles long.

Daniel Frank Brown built a system of gears using hardwood cogs in 1888 and geared an electric generator to the wooden waterwheel at his father’s planning, shingle and chopping mill on the Walla Walla River about half a mile south of Cole’s Crossing. 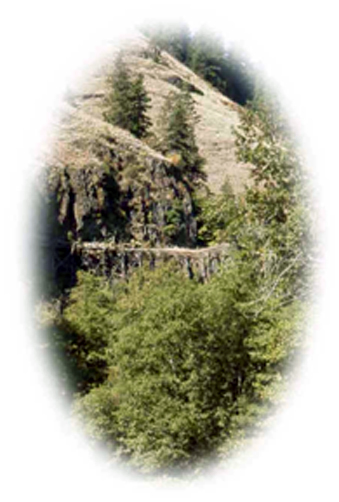 Brown used the power from the generator to light the mill and sold the surplus to a few nearby homes.  From this humble beginning grew the present City Light and Power that serves the homes and businesses in the Milton-Freewater area.
After beginning his electrical system, Brown continued to operate it on his own for about two years.  He had quite a problem selling electrical service, as most people wouldn’t trust this new service as being safe enough to have in their homes.
The city of Milton, in a special bond election August 20, 1891, received voter approval to issue $5,000 in bonds to buy the electrical system from Brown.  The system at that time selected clients and charged, not according to the amount of electricity used but by the number of lights in the customer’s home.  It took a favorable vote of the city council before a family could receive electrical service.
In 1929, the city proved upon 6,400 horsepower of power rights from water of the Walla Walla River.  A wood flume 48 inches in diameter and five miles long was construct to bring water under pressure into the city’s power house.  Diesel engines powered generators in two other city power sites.