In the stairwell at Frazier Farmstead Museum sits an object of much interest to museum visitors. It is about 16″ high and is in the form of a cross. It was crafted in the 1860’s by the maternal grandfather, James Theodore Beardsley, of Earl and Lela Frazier and given to his daughters, Frances and Eva Beardsley, when they were children. The cross is made of wood and covered with a putty substance into which several hundred small trinket-like objects were pressed while it was soft. The objects cover a wide range of objects from the era of the Civil War; marbles, buttons, pieces of jewelry, small porcelain doll parts, glass medicine bottles, and a variety of other ‘doo-dads’ too numerous to mention.

The cross came with Theodore and his wife Mary Jane Simpson Beardsley when they came west in the 1870’s. It remained in the family until Lela Frazier’s death in 1983. Lela along with her brother Earl willed the Frazier home, contents and property to the Milton-Freewater Area Foundation and it was opened as a museum the following year. A web site was opened several years ago, with Gwen Martin managing the site. People from all across the country have contacted the museum with inquiries about their area-connected ancestors. 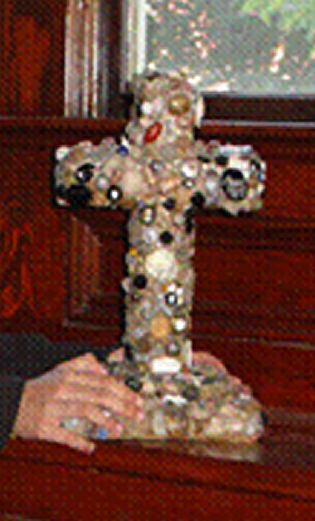 A couple of years ago, John Richards of San Luis Obispo, California e-mailed the museum director saying that his mother, Brenda Steunenberg Richards, remembered visiting her Frazier relatives around 1925. She was 6 years old at the time but had a vivid memory of a cross that she was photographed with. Among hundreds of old family photographs in the museum’s collection was a photo of a little blonde girl posing in the yard holding the cross. As all the photographs are cataloged, it was quite easy to find the very photo that she remembered. Copies were sent to John to give to his mother who is now 86 years old. Brenda’s mother was Frances Wood Steunenberg, the daughter of Eva Beardsley Wood and granddaughter of Mary Jane Simpson Beardsley who was also the grandmother of Lela, Earl and Mae Frazier. 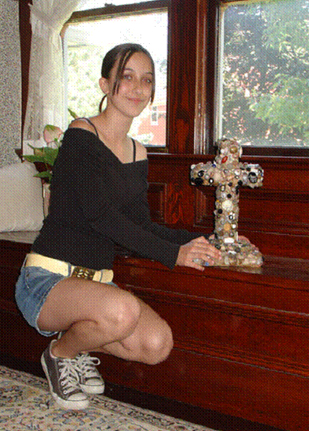 The family connection becomes even more interesting as Brenda’s grandfather was Frank Steunenberg, who was the governor of Idaho and elected in a landslide in 1896. Shortly after leaving office, he was returning one evening to his home in Caldwell, Idaho. He pulled a slide that opened the gate to his side door, triggering a bomb that blew him ten feet in the air. He died within an hour. It is believed that he was killed in retaliation for his stand on mining labor disputes. His assassination was to lead to one of the most remarkable trials in American history. The killer was defended by the famous Clarence Darrow.

John, his wife and daughter visited the museum in mid-July; a trip he had planned since first learning that photographs and family records were all documented in the museum’s collection They spent three hours going through a 3 inch thick binder filled with the family history and learning how all the various threads of that history wove together. They were shown a letter written in 1863 by Justus Simpson, John’s great-great-great uncle, to his sister Mary Jane. Three of the Simpson brothers, Justus, Lewis and George, were at the time serving with the New York Volunteers in the Civil War and all wrote letters home. Ten of these letters are in the museum’s collection. As Justus closes his letter, he writes ‘Give little Eva (Mary Jane’s daughter) a big kiss for me’. Justus survived the war and later moved out west to Heppner, Oregon were he died in 1917. George also survived the war and stayed in the east. Lewis did not survive the war. As the family left, John remarked that he would like to return someday, as it would take three days rather than three hours to go through all of the family information at Frazier Farmstead.

It is very gratifying to be able to provide information to those who seek to learn more about their ancestors and the museum welcomes all who we are able to help.